A novel method for producing polymeric nanomaterials, namely, ink­jet printing of polymer composite inks in and on a commercial template is highlighted. This method proves to be facile, versatile, and rapid. Varying design parameters related to the formulation and deposition of composite inks produced different nanomaterials. For example, changing the number of times the print head jets a drop at a given location or the choice of polymer yielded either nanotubes or nanowires. Alternating deposition of oppositely ­charged polyelectrolytes in the absence of vacuum generated ion ­selective thin films. 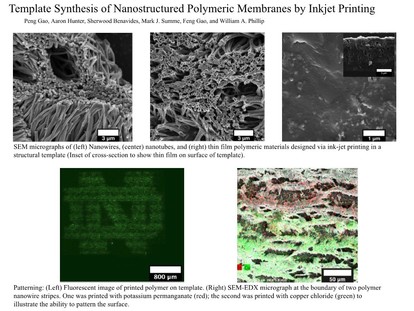 Scanning electron microscopy at NDIIF was imperative in proving generation of different nanostructures. Micrographs obtained of polymeric materials definitively show this ability to design nanotubes, nanowires, and thin films. The simplicity and versatility of this approach convey its use and advantage over other techniques for template synthesis and design of nanomaterials. What further distinguishes this is the ability to chemically ­pattern a surface. Energy-dispersive x-­ray spectroscopy elemental maps of polymeric nanotubes with differing functionality allows templated materials, such as membranes, to contain multiple functional groups on a single support. This has applications in biofouling mitigation, membrane separations, and sensors. The fluorescent image of the ND logo masterfully illustrates that even more complex patterns are possible.